The Philadelphia Inquirer: Rebuilding, then flipping an older home

Rebuilding, then flipping an older home 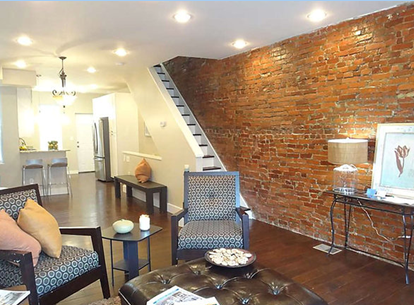 North Philadelphia native Richard Williams always had an interest in house-flipping, but it was just a matter of time and some luck for him to break into the field.

As a master sergeant in the Air Force for 15 years, Williams said, this was something he envisioned doing on the side that could eventually lead to a second career.

"After watching a few shows on flipping and listening to others toss around the idea of flipping, it just sounded more fun than just buying and renting properties," he said. "The idea of taking something from a run-down state into something someone would love to own is exciting."

Williams, who lives in Deptford and is stationed at McGuire Air Force Base, wanted to return to his home city to take on such projects.

To guide him in starting the process, he contacted a real estate education company, Fortune Builders, that he saw featured on the TV program Flip This House.

In the spring, he began looking around the city with a broker and found a property for his first project: a house on the 600 block of Morris Street in South Philadelphia.

"When I saw this house - the location and the layout of it - I just knew that this one was the one I definitely wanted to go with," Williams said. "East Passyunk is a very lively area and, in my opinion, has some of the best BYOBs in the city."

The rowhouse, at 1,386 square feet, would need a complete renovation. It had gone through foreclosure in April and was outdated.

To pay for the renovations, Williams applied for a loan through Lakehurst-based Alpha Funding Solutions, a company that lends to borrowers for property rehabs and new construction, among other projects.

Because he was a first-time flipper, the loan application process was a little more extensive, but Williams was approved.

Williams met with a contractor and project manager, and then the rehab process began.

"This was a full gut renovation," he said. "The walls came down, we put up new drywall and exposed the brick, we tore up the floors and put down new hardwood floors.

"We also opened up the bathroom - the original one was tiny, so we took some space from the middle bedroom to make the room bigger."

He changed the layout of the kitchen and installed new appliances and put in more cabinet space.

Williams also finished the basement and installed a bathroom.

Another thing he added - inspired, he said, by his communications background in the Air Force - was smart-home technology.

"The lights, heating and air conditioning are all controlled by a smartphone," Williams said.

Work on the three-bedroom, two-bath home took five months, and then Williams experienced every flipper's dream.

David Hansel, president of Alpha Funding Solutions, said that though Williams' first effort worked out really well, flippers don't always get lucky. The most important thing is to "know the area and the market," he said.

"It's really about understanding the project you're going to do, who's going to handle what parts of it, and to know the numbers," Hansel said, "because at the end of the day - we, as the lender, want to know it - but if you're going into a project and you don't have a lender, and you think the project is going to cost you 'x' and it costs you 'y,' you may be paying money in the end."

Williams said the hardest part about the experience was staying within his budget.

"There are so many ideas you will have in your head, and others will tell you what to do, but you have to be disciplined to create a plan beforehand and stick to that plan," he said.

The easiest part, Williams said, was the closing.

With the success of his first project, he recently began his second - a house a few blocks away in the same neighborhood, on Moore Street.

For now, Williams said, he is on the right track for making this a career.

"I retire in five years," he said, "so the plan is to make a smooth transition from the Air Force into full-time real estate."